It all started with a four strings of Christmas lights.

Thirteen years ago, while living in Brampton, Darryl and Kathy Lambert decided to decorate their house for Christmas.

“I had four strings (of lights) to decorate the house,” said Darryl. “It looked okay, but I decided the next year I’d add to it.

“I had no idea I’d be creating a monster,” he joked.

Every year, the Lamberts would add more to their decorations, and Darryl admits it had become a ‘bit of an obsession’.

When the Lamberts moved to their present home on Johnson Crescent, the new house had great potential for more wild and wonderful light displays.

“He (Darryl) bought the house because it would work for the lights. He didn’t care about the rest of it, only the lights,” laughs his wife Kathy. “He even had the (house) builder upgrade the electrical service so it could handle the load the Christmas lights would put on the system.”

Now in their seventh year in Georgetown, the light display boasts more than 37,000 lights, a mix of 25,000 LED lights and the rest made up of various lights.

“I have more then 3,000 feet of extension cords out there,” said Darryl. “I didn’t know how many feet of cords I had until this year – I kept an inventory and totaled them – I was kind of surprised.”

This year Darryl has added a 20-foot ‘tree’ which has fabulous potential to add to the display. The tree alone has 9,400 lights on it.

The various lighting configurations are run by a computer, which operates the lighting display, also running the sound system, which is choreographed by Darryl, making the lights pulsate to various pieces of music. People driving by can hear the music, as well as a commentary on the lights, by tuning their car radios to 104.9.

The display is pretty much a year-round project for the Lamberts. The displays and stands are all built by Darryl and he starts assembling the display outside in late September – it takes about two months to complete.

Their neighbours have no problem with the dazzling display which has also proven popular on YouTube.

The lights are on weeknights from 5 to 11 p.m. and weekends until midnight.
Even though the lights bring visual joy to anyone driving by, this year Georgetown Hospital Foundation will also benefit from the display.

Mounted at the front of the driveway is a donation box, which will all be given to the Hospital Foundation.

“We decided to keep the donated money local, and Kathy works as a lab technologist at the hospital,” said Darryl, “We empty the box every night to keep track of the money coming in.”

The donations have been as high as $150 in one night. By Christmas, the Lamberts hope to exceed $1,000 in donations.

The Lambert’s house is located at 14 Johnson Crescent, just off Berton Boulevard at Trafalgar Road. 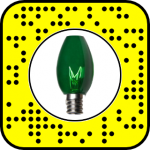